Intersectionality is not just for Black History Month. 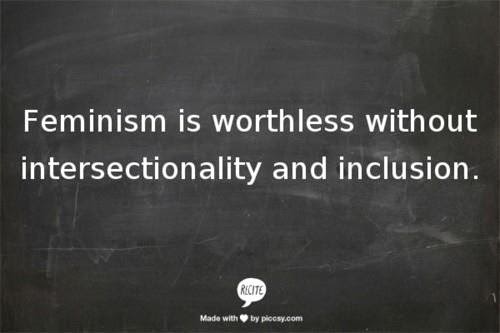 At the beginning of the academic year, in the freshers/black history month period, I was able to use my intersectional identity to aid our wonderful black students officer by taking up some of the university events that asked for speakers.  Most of these events were about Intersectionalty, and they were awesome and well attended and emotional. Also doing these in black history month enabled me to help give the theory some context, as some people just don't know that the theory came out of black feminist discourse and it came out of the analysis of the intersecting experiences of race, class and gender.
I for one have seen black women attacked for it more rather than welcomed into spaces to speak about something that effectively changed the face of twenty first century liberation activism, so I thought: bring it.
This was an amazing start to the year and this is blogpost about how the extend that.

Frequently asked questions at Intersectionality panels:
What about the risk tokenism?

Your first attempt to make an effort to include a marginalised group is always going to look like tokenism, whether it is or not. You need to get over it. It's better you take the first step and activity do something to make spaces more inclusive than do nothing. The moment it becomes tokenism is the moment where you expect that one black member if your committee, that diversity rep, that black rep, that intersectionality rep, to be responsible for all diversity and inclusion issues to a point where you don't have to do a nothing. It's everyone's jobs to be aware intersectional struggles. That's right, everyone. Not saying that those roles aren't important, just saying they are not there to do all the work for you.
If they don't teach us then how did we know?
(In response to "it's not a marginalised group obligation to educate you")
You're reading this on blog spot right so I'm  assuming you can use google, tumblr and the internet in general. There's also many text by marginalised groups that have been published across the years about how they've felt within feminist and activist spaces, also the internet means that we can share stories faster than before. Also it be great if you actively went out to talk to groups (checking you privilege first), instead of them expecting them to come to you and use up their time and energy educating you. Although I do encourage women, especially black women to stay involved in women's groups, I know it's hard when your dealing with microgressions of racism in a space that's meant to be safe. Some people, like myself have the privilege of having full time jobs where than spend lots of time educating people. Some people have lots of patience and energy to explain things over and over again. Some people don't, and they should feel forced to, so do them a favour and try actively seeking education.
Why focus on black feminism, and not just general feminism?
Ok we need to admit that when people talk talking about feminism, their usually talking about it in the limitations of a Eurocentric perspective, or "white feminism". But think about it this way, if you take the word black (in it's politic sense, meaning non-white), and if you think about the fact that black people make up the global majority of the world. Even if we just concentrated on (black) feminism, we'd still be talking about a more realistic representation of gender inequality in the majority of global society. The idea that black feminism is a new niche sector of feminism comes out the perspective of black people being a minority, influenced by the west rather than be able to analyse and mobilise for ourselves within our own cultures without the aid of western intervention.
The black women at my institution want to make a black women's group/ womanist group, because they think that the main FemSoc isn't inclusive, what do I do?
Leave them be, there's obviously something that's happened to make them feel like they want their own space and you shouldn't use your social capital or privileges to prevent that from happening. You should probably remain in close contact with them and work with them often, and discuss how you can make spaces more accessible to them, but respect that marginalised people have the right it create safer spaces or themselves in a world that actively excludes them everyday. Don't get defensive over it, no one owns feminism, there's nothing wrong with more women's groups on campus. See it as more ally ships to take on the patriarchy.
-
After taking part in discussions on intersectionality, I often got a line of (mostly) women of colour coming up to me thanking me for just being on the panel. Saying that they were cautious of coming to a feminist society/ women's forum event but I gave them some hope by unapologetically talking about the exclusion of women from marginalised group and critiquing mainstream white feminist campaigns in public. I still bump into some of those women months after saying that they saw me speak somewhere and I inspired them to stick with their FemSoc/ women's group. Although that does make me feel like I'm doing my job, I know it shouldn't be me making this impact on campus and the workshops or discussions on intersectionality or global feminism or black feminism shouldn't be the only spaces that women of colour feel ok being in.
Some tips for people who run FemSocs which have hardly any black women attending.
Intersectionality is a tool that you should use to shape everything you do. It's not easy, but you really need to prepared to challenge yourself, your group and the oppressive social structures that you may uphold and do something about it. If you're not prepared to do that, how can you use the label intersectional? If you don't want to be faced with questions about how you have not mentioned a marginalised group, I.e: women of colour, attempt to include them in the presentation/ discussion, historical context in the first place. When some one ask calls you out for not talking about race. For the love of god at least try to answer the question, if you don't it's just embarrassing and disappointing for all of us. Don't start talking about black people in third world countries (unless the question was specifically about people of colour in third world countries), there are black people here too.
I've probably got more of these ramblings somewhere on a postcard.
The NUS women's campaign have created an Intersectionality 101 guide for pact it's groups to use with the help from women from across the liberation groups (lgbt, disabled and back). It probably won't be the answer to every single issue but it's a starting point, or a restart point for those of you tha really want to embed intersetionality into everything you do.
Susuana xx
Posted by SusuanaLove at 02:13 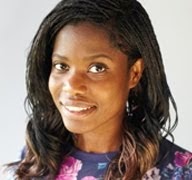